Synopsis of the Story 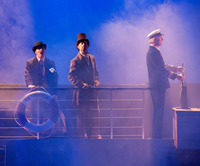 The story begins in London on October 2nd, 1872, the day of a daring robbery of the bank of England. Passepartout secures a manservant job with the meticulous Mr Phileas Fogg (His name is Fogg/ A Quiet Life) and settles in to his new position as his new master sets off for the Reform club. Fogg wagers £20,000 that he can traverse the globe in eighty days while his fellow members disagree that the feat can be managed (Around the World in Eighty Days).

Fogg sets off that very evening and arrives in Suez where an unfortunate likeness to the Bank robber makes him the unwitting suspect of the tenacious detective Fix (I Always Get My Man). As he cannot secure a warrant for his arrest on time, Fix follows Fogg on board the steamer bound for Bombay, hoping to glean some information from Passepartout about his master. Fix, still without a warrant seizes upon an incident between some priests and Passepartout to slow Fogg down. Fogg and Passepartout catch a train to Calcutta but the train line is not completed so Fogg searches for a suitable mode of transport to where the track begins again.

They buy an elephant (Elephant Ride/ Kali Ma) and rescue an Indian princess, Aouda, from a funeral pyre making them two days late. Fogg is arrested with Passepartout in Calcutta because the latter desecrated a temple by wearing shoes. The Judge sentences them to a prison sentence which will surely make them lose their bet. Fogg posts and subsequently jumps bail, much to the annoyance of Inspector Fix, who had set the whole thing up to delay them.

Still without his warrant, Fix follows the company on board a steamship to Hong Kong, where Fogg hopes to deliver Aouda to her uncle. Passepartout meets Fix on board, and becomes suspicious of him but agrees to go for a drink with him to see if he is really a spy for the Reform Club. Fix tells him that his master is a criminal but Passepartout will not believe it. Fix plies him with drinks to prevent him telling his master of the premature departure of their next vessel. Passepartout gets drunk and falls under the spell of the femme fatale, Blue Lotus (The Dragon Tattoo).

Fogg and Aouda, having found her uncle has moved to Holland, arrive at the port to find their ship gone and Passepartout nowhere to be found. Under the guise of Francis Ball, Fix keeps Fogg in his sight and the three find a boat that will take them to Shanghai where they will meet the steamer for Yokohama. Just as they arrive in the port of Shanghai, their steamer is leaving so they alert them with a cannon shot (All at Sea).

Fogg and his company arrive in Yokohama. Fix has no way of arresting Fogg as his newly arrived warrant now is invalid out of British territory (Around the World in Eighty Days – Reprise) so he decides to stay on board until Fogg is in his grasp again. Fogg finds Passepartout who has been working in a street theatre since being put onto the steamer to Yokohama in a drunken state, but Passepartout has no time to tell him of Fix. Once on board the steamer to San Francisco, Passepartout meets Fix once more and is told that the detective will help his master get back to Britain as fast as he can as he wants to prove Fogg is a criminal. Aouda is falling in love with Fogg (What Do I Know). In this uneasy state, they arrive in San Francisco during a political rally where Fogg accidentally angers Colonel Stamp Procter. Vowing revenge, Proctor is swept away in the crowds. (Time to do Some Electin’). On the train to New York, they encounter a number of obstacles, such as a Salt Lake Missionary, (That’s Reason to Rejoice), a herd of buffaloes, a collapsing suspension bridge, a duel with Colonel Proctor and bandits. As Passepartout unhooks the runaway engine from the carriages, he is kidnapped by the bandits and is rescued by Fogg and Proctor.

This has made the company miss their train so they are taken across the snowy plains by Mudge and his wind powered sledge (Morning Star) to Omaha and on to New York by train. Arriving forty-five minutes late for their ship, Fogg and Aouda search for an alternative, leaving Passepartout and Fix to search together (Stuck With You). Fogg, having found a boat that will only take them to Bordeaux, bribes the crew and takes over the vessel from a cantankerous Captain Speedy. As they run out of fuel, Fogg buys the boat from Speedy and they burn every flammable part of it for fuel. They arrive in Liverpool just as the fuel runs out. As soon as Fogg steps on to British soil, Fix arrests him. Fogg sits in his cell and contemplates (Could Have, Should Have, Would Have). Fix rushes in, telling Fogg that the real robber was caught three days earlier and is punched to the ground.

Arriving in London five minutes late, Fogg has lost his wager. Aouda professes her love for Fogg and they send Passepartout to arrange a wedding for the next day (This Much I Know). Passepartout realises that they have arrived twenty-four hours in advance because the crossed the International dateline and the company rush to the reform club. Fogg gets there at the last second and wins his bet (Around the World in Eighty Days – Reprise)