A World of Adventure - Author's Notes 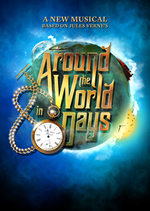 When starting out on my journey with Jules Verne, I was struck by the notion that, like our protagonist Phileas Fogg, I was setting myself a challenge too. How, on one stage, could I produce a set of larger than life characters and show the constantly changing continents and locations on one stage?

'Around the World in 80 days', with its rich treasure chest of colourful characters and situations, was a novel I had long wanted to adapt as a stage musical. Each time I begin a project, I see it played in my mind’s eye; I hear the voices of the characters and see them move like chess pieces across my imaginary stage.

I try to give each show a distinct style but also allow for the creativity of the director and performer. And yes, it is true that I have my own vision of how it should be produced but I am always amazed and delighted at the ingenuity of the companies who choose to stage them. It was for this reason that I took on such an exciting project as Verne’s 'Around the World in 80 days'.

I chose to set the piece in something akin to one of the East India Company's warehouses; a company which traded overseas and folded a few years before our story begins. Like our world and the British Empire things were changing. I hoped that a warehouse full of travelling trunks, costume skips, various bric-a-brac would be building blocks enough to create the many countries and transport across the globe. I wanted to create a true ensemble piece where each and every performer would be an indispensible part of the show, creating elephants, sleds, steamships and myriads of other settings and modes of transport right before the eyes of the audience.

I felt it was necessary to keep the playing area moving without scene change and this is why the cast create locations as the show moves swiftly onward on a multi functional set. Clever lighting can be used to delineate many different playing areas, in both space and time. No covering incidentals and clumsy long set changes to slow the pace of the show and only underscore to pick out a few moments for pathos or adventure.

I wanted larger than life characters to fill the stage creating breakneck farcical moments and comedy, though still able to produce softer emotional moments. It should be cheeky, playful and exciting, using physical comedy, and all the ingenious ideas each company can bring to it.

Although the script can be quite specific in its stage directions, it can be as elaborate or as minimal as a company wishes. I am sure that an innovative cast and director can bring out the fun and excitement of creation in thousand different ways.

In a world where theatre has become able to show the most minute detail using projection and high tech gadgetry, I chose to write something that would remind the audience how to use their imagination. After all, the mind is the most fantastic piece of technology we have.

I hope that this new and exciting piece will inspire you to take risks, be creative and, above all, have fun.