Tails of Hamelin - The Characters

Piers Chater Robinson is available by telephone, WhatsApp or Zoom to discuss with you ANY aspect of your potential production. You may request these one-to-one personal calls with Piers BEFORE or AFTER you decide to apply for your no-commitment licence quotation.

This may be particularly helpful during the current challenging times when the staging of a musical theatre production is limited to a presentation that falls within the social distancing rules.  Piers is also available of course to producers and directors at any time during their rehearsals. To book your call, please email him on piers@itmshows.com.

Playing age is for reference as it will depend on the ages of your group. It is merely an indication for costume and aging for younger groups. The gender mix of your actors can be rearranged but the characters should be played as the gender specified. It can be pantomime-like. The costume should be specific to each character. In the case of the stall holders (eg. Herr Glocken, Frau Blumenkohl etc.) they should have costume that have emblems of what they sell. For example, on the skirts of Blumenkohl, vegetables; Glocken, clock parts on his work apron. Bright, Germanic and big. Leading characters should stand out with an indication of what they do. There are singing roles and non-singing roles, to aid inclusivity.

Herr Glocken
Singing role. Male. Playing age: 50 upwards. The clock seller. Gepetto/Einstein look about him. One of the clowns of the piece. Moustachioed, slightly foolish but rather sarcastic.

Herr Strudel
Singing role. Male. Playing age: Mid 20s upwards. The baker. Rotund. Slightly dainty due to his love of theatre and romance. Eats as much as he sells. Clown of the piece as part of the trio of stall holders.

Frau Blumenkohl
Singing role. Female. Playing age: Mid 20s upwards. The grocer. Rebellious and forms the third in the clown trio. Quick witted, tall and can be quite hard-nosed.

Hans
Singing role. Male/Female. Playing age: No older than 11. The crippled boy. Small, weak and pale. He walks with a crutch. He is very much like Tiny Tim.

Etta
Non-singing role. Female. Playing Age. No older than 15. A village child. Caring, thoughtful and quite a leader.

Dieter
Non-singing role. Male/ Female. Played as a boy. Playing age: No older than 14. A village child. Bit of a bully.

Councillor for Health and Safety
Singing Role. Male/Female. Played Male. Playing Age: 40s upwards An officious official. Well to do, well fed and well heeled. He wears a lab coat and goggles over his suit. He has a hazard sign on the back of his labcoat. He is rather jittery and has a cold.

Councillor for Finance
Singing Role. Male/Female. Played Male. Playing Age: 40s upwards An officious official. Well to do, well fed and well heeled. He is dressed as a banker with bowler hat and briefcase. He is slimy and miserly.

Councillor for Housing
Singing Role. Male/Female. Played Male. Playing Age: 40s upwards An officious official. Well to do, well fed and well heeled. He is big and burly like a builder and carries tools of the trade, like hard hat and Hi-viz but suited. 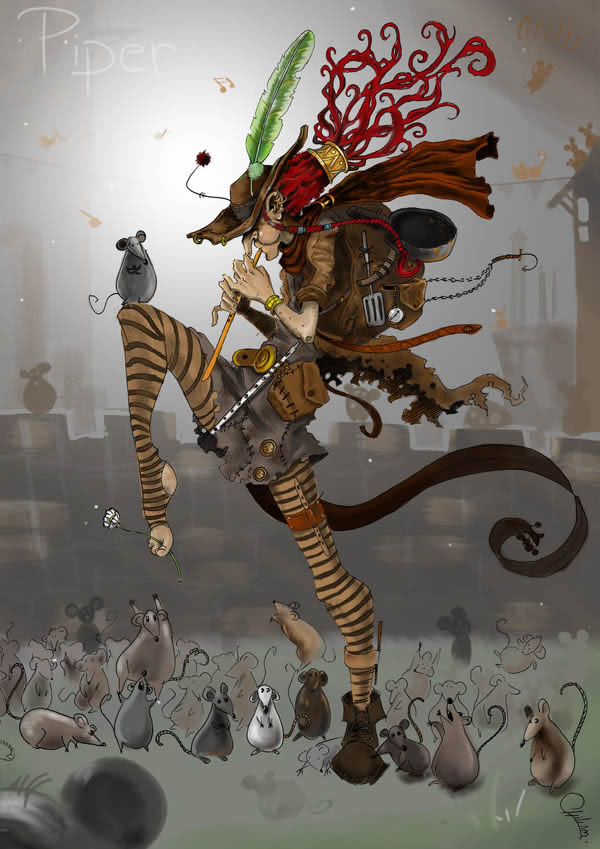 "Piers Chater Robinson's tuneful, new score will have you rocking in the aisles, tapping your feet, shedding a tear at the tragic, heart-wrenching denouement, and humming all the way home"