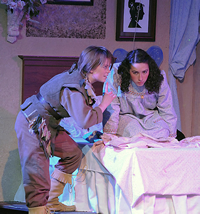 PETER PAN – THE BRITISH MUSICAL opens in the Victorian London home of the slightly eccentric Mr. and Mrs. Darling. ("The Darlings")

They have three children; Wendy, John and little Michael. Wendy often dreams of a boy named Peter Pan who visits her in her slumbers but who is he? Her mother reassures her he must be a figment of her imagination, appearing to her only in dreams.

One evening, Mrs. Darling is dozing by the fire in the Nursery when the window blows open of its own accord. Startled, she awakens to find an unkempt boy before her. Mrs. Darling’s cry alerts the family dog, Nana, who barges into the room and endeavours to slam the window shut, before the boy can escape. The boy narrowly does escape, however, but not before his shadow is cut clean off by the closing window and it remains trapped in the Nursery.

Nervously, the boy returns for his shadow a few days’ later and this time awakens and meets Wendy ("Peter"), who recognizes him from her dreams and sews his shadow back on for him.

Wendy learns Peter’s most ardent wish is to remain a boy forever ("What happens when you’re grown up?"). The cocky but lovable Peter Pan invites Wendy and her brothers to “Neverland”, teaching them to fly ("Come Away, Come Away!") and guiding them over the oceans to his fantastical realm of fairies, mermaids and “Neverland” Indians. 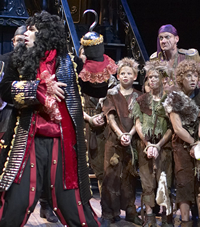 There, Wendy enthusiastically takes up the role of Mother to Peter ("Wendy’s Song") and his gang of Lost Boys in their secret underground home. But not everything is perfect in “Neverland”. Evil Captain James Hook, an educated but dastardly pirate, is Peter Pan’s arch nemesis ("Rich Damp Cake") and is set on his destruction.

While Mr. and Mrs. Darling remain inconsolable and heartbroken in London, their children become so ensconced in their “Neverland” adventures that they begin to forget their real family. And Wendy begins to wish more than anything that Peter would consider growing up to become a man ("Why?").

Wendy realises reluctantly Peter is indeed to stay forever young and knows it is long past time for her and her brothers to return home to her Mother and Father. And much to Peter’s horror, she persuades the Lost Boys to join them on the journey.

Eventually Hook succeeds in defeating the tribe of Neverland Indians ("Braves To War") who have pledged to guard the Lost Boys. The Pirates then capture all the children as they leave their underground hide-out - except their ever-young leader, who then sleeps exhausted, believing his Lost Boys have safely left to fly away.

Hook makes his way into the hideout and sees Peter alone asleep. Hook then poisons the ‘medicine’ Wendy has left for Peter. Luckily Peter’s loyal Fairy Tinkerbell wakes Peter after Hook’s departure and explains the medicine has been poisoned, and not to touch it. Peter does not believe her – but before he can drink the medicine, Tinkerbell quickly drinks it first, and begins to die. Peter realises the only way Tinkerbell can be saved is to ask the Children of The World to believe in Fairies ("You Gotta Believe"). With the help of the children in the audience, Tinkerbell begins to recover and she is soon back to her old self again. 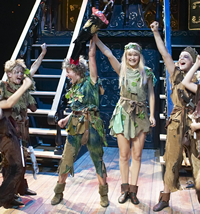 Now it is up to Peter Pan to rescue his friends, dispatch the pirates and settle things once and for all with Captain James Hook. Through cunning he steals onto the Pirates Ship and effects a daring rescue – which culminates in a battle between the Lost Boys and all the Pirates. Wendy, her brothers, the Lost Boys and Peter Pan are victorious – the Pirates are vanquished and Captain Hook disappears overboard into the jaws of the waiting crocodile.

Now it is truly time for Wendy, her brothers and the Lost Boys to journey home ("We’re Going Home"). There they are adopted by a jubilant Mr & Mrs Darling who are so relieved and delighted to see their children again.

And it is only Peter Pan who continues his ever-youthful adventures in Neverland with his beloved fairy, Tinker Bell. But not before he makes one more journey to the children’s nursery in England to see Wendy.

Wendy is initially overjoyed to see Peter again, as she believes he may have changed his mind and will be staying with her family. However all too soon she realises Peter has come to see her just once more. Very sadly Wendy is about to wish Peter ‘Farewell’ one last time before he flies away – but then…. Peter stops her, explaining the memory of the adventures they had together will live on forever and that Goodbyes would suggest some sort of ending –

And there is no ending to Peter Pan. He will just stay young and carefree forever ("Don’t Say Goodbye").

Everything you need to know about Peter Pan the Musical.