Synopsis of the Show 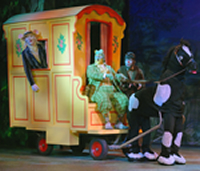 On a glorious Spring morning on the Riverbank the Riverside animals are playing happily when, suddenly, Mole appears from under the ground. Rat introduces himself and sings of the wonders of river life. They decide to spend the day together and commence their picnic. Badger arrives, complaining about Toad's latest craze. He then sets off to Toad Hall with the intention of sorting out Toad once and for all. Toad appears and invites Rat and Mole to go caravanning with him. They pack away the picnic and set off in the caravan.

The action moves to the Wild Wood, where the wicked Weasels, led by the evil Chief Weasel, are performing their tribal dance. In the distance is heard the sound of the caravan, which is then forced into a ditch by an approaching car. The Weasels, delighted by the accident, disperse as the panic-stricken horse charges onstage. Rat, Mole and Toad arrive. Rat suggests that the cart should be mended but Toad is in the grip of a new craze: he now wants a motor car! Rat takes Toad off to look for the wheelwright but Mole, left on his own, is frightened by the weird shapes of the Wild Wood. The voices of the Wildwooders lure him into the wood, but Rat arrives just in time to rescue him from the clutches of the Chief Weasel. They decide to take shelter from the wind and snow and, by chance, find Badger's house where they stay for the next few weeks.

Meanwhile, at Toad Hall Toad is pursuing his latest craze. He takes delivery of a new motor car but, as usual, manages to wreck it. After breakfast at Badger's house Mole, Rat and Badger decide that the time has come to take Toad in hand. On arrival at Toad Hall, while Badger takes Toad inside for a lecture, Rat remembers life on the river. The animals lock Toad in his bedroom and take it in turns to guard him until he agrees to give up motor cars. However, Toad feigns illness and escapes through the window to find a new vehicle. 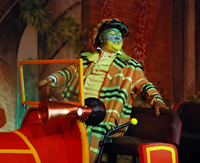 The scene opens in a courtroom where everyone (including Badger, Rat and Mole) has gathered for the trial of Toad. The Weasels are chattering excitedly and behaving badly. Toad's three friends are sitting with long faces. A clerk silences the court as the Lady Magistrate enters. There are three counts against Toad: stealing a valuable car, excessive speeding, and gross impertinence. As Toad is brought into the courtroom, the Weasels jeer. Witnesses are called to the stand. The Policeman who arrested Toad for speeding states that Toad was driving fifty miles per hour over the speed limit. Not only that, Toad called the officer "Fatty Chops" during the arrest. Toad argues that he actually just borrowed the car; he didn't steal it. Toad also claims that he was describing what he had for lunch; he didn't really call the Policeman "Fatty Chops." The Court finds Toad guilty of all charges and sentences him to twenty years in prison. ("Goodbye Toad") The deeply saddened friends have to leave the panic-stricken Toad in the hands of the authorities.

Some months later, Toad is sleeping peacefully in the dungeon. Rosy, the jailer's daughter, enters carrying Toad's breakfast. Toad reminisces about his home and wishes he had listened to his friends. If he had he wouldn't have ended up in this terrible place. Rosy encourages him to talk about his home, because it seems to cheer him. ("Toad Hall") It is the finest home in the district and has been in his family for many generations. Toad promises that Rosy will be his first guest of honor at the party he will throw as soon as he escapes from prison. The much-enchanted Rosy offers to help Toady escape by having him disguise himself as her aunt, the prison washerwoman. If Toad gives Rosy's poor aunt some money, she's sure she can make the plan work.

Rosy goes off to get her aunt while Toad counts out some gold coins. When Rosy returns with her aunt, the woman gives him her clothes and he gives her the pile of coins. Rosy suggests that they tie up the aunt so it appears that Toad forced her to do this. Soon, Toad is dressed as the washerwoman, the aunt is bound and gagged in the corner, and Toad steals out of the dungeon.

Down by the riverbank, the animals are playing and life continues as normal. ("Messing About" - Reprise) Rat joins in with the other animals. After dancing about, the animals disappear leaving Rat by himself. A familiar voice is heard. An exhausted Toad enters in his disguise. Rat sends Toad off to change out of his ridiculous outfit. Badger and Mole enter, looking tired and solemn. Mole tells Rat that it is worse than they expected: Toad Hall is surrounded by the Wildwooders. Toad re-enters, looking like his old self, and tells his friends he wants to have a party tonight. Rat tells him that the Wildwooders have taken over Toad Hall, and they say they've come to stay for good. What used to be a glorious place is now a reckless house of depravity. Toad bursts into tears and Badger tries to calm him. Tonight they themselves will attack Toad Hall, via a secret underground passage that leads from the riverbank directly to the middle of Toad Hall. Tonight is the Chief Weasel's birthday and all the weasels will be gathered in the dining hall to celebrate. They won't be armed. During the party, Toad, Badger, Mole and Rat will sneak in with their weapons and take back Toad Hall. ("Off A-Bashing")

That night the four friends make their way to the banquet hall via the secret passage. A wild party is in progress above them. Not only are they celebrating the Chief Weasel's birthday, but also the fact that Toad is no longer with them. ("Toad Has Gone to Prison") The Chief Weasel even thanks Toad for being sent to prison. Toad emerges from the shadows and informs the Weasels he has returned. Toad's armed friends enter and take the Weasels completely by surprise and chase them off. Only the chief Weasel remains to fight Toad. After an extensive fight, Toad defeats the Chief by bopping him on the head, rendering him semi-conscious.